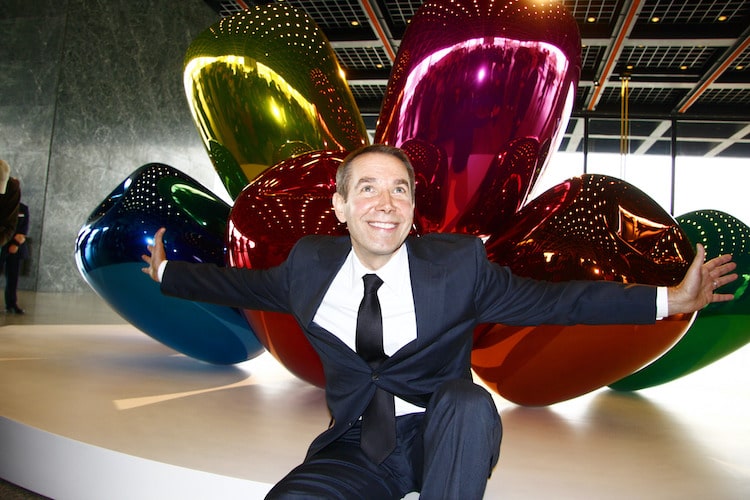 Ever since the 1980s, the renowned artist Jeff Koons has been making art that challenges our perception of consumer culture. He first shocked the art world when he displayed commercial vacuum cleaners as sculptures, sparking a dialogue about the role of material objects in our lives. Since then, his work and style have evolved to include some of contemporary art‘s most famous sculptures. From pop culture-inspired statues to giant balloon animal sculptures, his pieces continue to invite viewers to playfully question reality.

“The job of the artist is to make a gesture and really show people what their potential is,” Koons once said. “It’s not about the object, and it’s not about the images; it’s about the viewer. That’s where the art happens.”

Here are six Jeff Koons artworks that showcase how his artistic practice evolved over the years.

Koons began creating his first series of artworks, titled The New, in 1979 when he was still an unknown artist and working as a Wall Street broker. Throughout the ‘80s, he presented vacuum cleaners in plexiglass display cases that were illuminated by industrial fluorescent lighting.

Koons grew up during the 1950s when American families were encouraged to adopt traditional gender roles and display their status through the objects that they owned. By glorifying vacuum cleaners in this way, the artist invites viewers to re-examine the everyday objects as symbols of gender, cleanliness, and class.

This opulent, larger-than-life-sized sculpture is based on a press photograph of Michael Jackson and his pet monkey, Bubbles. Koons’ heavy use of gold references Medieval and early modern religious statues as well as the cost of celebrity status and fame. “I wanted to create him in a very god-like icon manner,” explained Koons. “But I always liked the radicality of Michael Jackson; that he would do absolutely anything that was necessary to be able to communicate with people.”

Now among the most iconic works of contemporary art, Balloon Dog (Red) is part of Koons’ Celebration series. It’s one of many sculptures inspired by inflatable characters. “I’ve always enjoyed balloon animals because they’re like us,” Koons said about the playful series, “We’re balloons. You take a breath and you inhale, it’s an optimism. You exhale, and it’s kind of a symbol of death.”

Although it looks like it could pop with a pin, Balloon Dog (Red) is made from mirror-polished stainless steel that is covered with a transparent varnish. Koons has also created smaller, collectible versions of this sculpture, as well as balloon swans, rabbits, monkeys, and even Venuses.

In 2013, his 10-foot-tall Balloon Dog (Orange) was purchased for $58.4 million at Christie’s, setting a new record for the most expensive work ever sold at auction by a living artist. Koons held onto the honor for five years until painter David Hockney‘s Portrait of an Artist (Pool with Two Figures) sold for $90.3 million (including fees) in November 2018. Koons then reclaimed the title in 2019 when he sold his 1986 stainless steel sculpture Rabbit for $91.1 million.

Serving as a colorful memorial to childhood, Koons created one of his largest and most complex sculptures, Play-Doh, between 1994 and 2014. Although it appears as though it’s made from the soft modeling material, the piece actually comprises 27 interlocking pieces of aluminum, held together by gravity alone. The giant piece was inspired by Koons’ own son who, as a toddler, presented his father with a similar mound of Play-Doh. “He was so proud. I looked at it, and I thought this is really what I try to do every day as an artist, to make objects that you can’t make any judgments about,” recalls Koons. “That it’s perfect, that you just experience acceptance.”

Play-Doh is also part of Koons’ Celebration series, in which the artist focused on highlighting the passage of time. Many of the pieces reference the cycle of birth, growth, and the human drive to procreate. “Play-Doh is an object, which captures the raw energy of creation,” says Koons. “Yes, we can all be artists.”

Hulk (Friends) is part of Koons’ Hulk Elvis series in which the artist based a number of sculptures on the comic book character, the Incredible Hulk. The trick-of-the-eye sculptures closely resemble the appearance of vinyl inflatables, but each one is actually constructed from polychromed bronze. Koons’ continued fascination with inflatables encourages the viewer to question what is real and challenges what should be considered as fine art.

Koons’ Hulks represent the connection between Western comic book culture and the concept of gender. Koons explains, “They’re there as protectors… but at the same time they can become very, very violent. The Hulks are like that—they’re really high-testosterone symbols.” This is perhaps best captured in Hulk (Friends), where the six inflatable characters are perched on his shoulders. Koons reveals that this particular Hulk is “a guardian, a protector, that at the same time is capable of bringing the house down.”

The subject is based on a small porcelain figurine by a Ukrainian artist named Oksana Zhnikrup. Koons went much larger, however, and created a version of the dancer that stands 45 feet tall. Featuring a mirrored, nylon surface, the material allows the viewer to see themselves in the sculpture. “In a reflective surface, your existence is being affirmed,” Koons explained. “When you move, your abstracted reflection changes. The experience is dependent upon you; it lets you know that art is happening inside of you.”

All images via Jeff Koons.

What is Contemporary Art? An In-Depth Look at the Modern-Day Movement