There were many, many steps along the way for artist Clydetta Fulmer

Montgomery artist Clydetta Fulmer is shown with her lifesize bronze statue of Rosa Parks, on permanent display at the end of Dexter Avenue, looking toward the Court Square Fountain. (Photo: Shannon Heupel/Advertiser)

Two sisters stand in Montgomery, creations of love and patience made in the image of a civil rights icon.

One is a strong and resilient bronze observer, clutching her purse in both hands, forever waiting at a street corner.

Another, the first born, is a feat of clay. She’s made of investigation, discussion and many, many months of labor. Most people will never see her in person.

On May 16 last year, Montgomery artist Clydetta Fulmer was commissioned to create a life-size bronze statue of Rosa Parks, whose arrest on Dec. 1, 1955, sparked the Montgomery Bus Boycott. In honor of Parks and Alabama’s 200th birthday celebration, the statue was unveiled on Dec. 1, 2019.

“I thought it was an honor and an opportunity,” said Fulmer, who has several other commissioned sculptures in Montgomery. She sculpted the bronze statue of Gen. Richard Montgomery that was unveiled last year, and also has statues of Helen Keller as a child, Saint Margaret Queen of Scotland, Gene and Mark Stallings, and more. Several of her pieces are at Faulkner University. 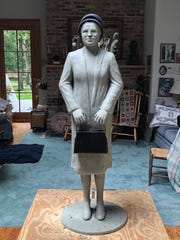 Rosa Parks, with her had and glasses, holding her purse.  (Photo: Contributed)

“Clydetta is a fantastic artist. She has work all over the country. She’s a very humble woman, but she has done a lot of important work over her career,” said Ashley Ledbetter, who was the project manager for the Rosa Parks statue. Ledbetter also serves as executive director of the Montgomery Area Business Committee for the Arts and chairman for Montgomery’s Public Art Commission.

The real Parks was 5 foot, 3 inches in height. Her 300-pound bronze statue is the same, though it gets a little boost from 2 inch heels and a hat.

Standing there on the sidewalk at the end of Dexter Avenue, with her back to the Capitol and an unwavering gaze and smile toward Court Square Fountain, she looks like any other person from a distance. There’s no raised platform.

“When I worked on the statue in my studio, it was always on a platform that was about 10 inches tall. At the foundry, it was also on a platform,” Fulmer said. “When we set her in place here on the sidewalk, we said she looks so small.”

In 1955, Parks refused to give up her seat to a white passenger on a Montgomery city bus. Under the leadership of Dr. Martin Luther King Jr., black residents refused to ride city buses after Parks’ arrest. After 381 days of boycott, the Supreme Court ruled that segregation on public buses was unconstitutional.

Fulmer remembers a comment on the day the bronze Parks was unveiled that it was “amazing and humbling that such a small lady would make such a tremendous difference.”

One of the city’s leaders who pushed to get this project done is former Montgomery Mayor Todd Strange.

“Mayor Todd Strange really wanted to create a statue of Mrs. Parks in celebration of the city’s and the state’s bicentennial anniversaries,” Ledbetter said.

“I told (Strange) I thought he was very generous to commission a statue that wouldn’t be completed until he was out of office,” Fulmer said.

The first stages of work on this project actually began before Fulmer was commissioned.

With a historic figure like Parks, it’s not a simple process to create a likeness for public use. Ledbetter said it took months of talks with the Rosa and Raymond Parks Institute for Self Development in Detroit to get the intellectual property rights for a Rosa Parks statue. 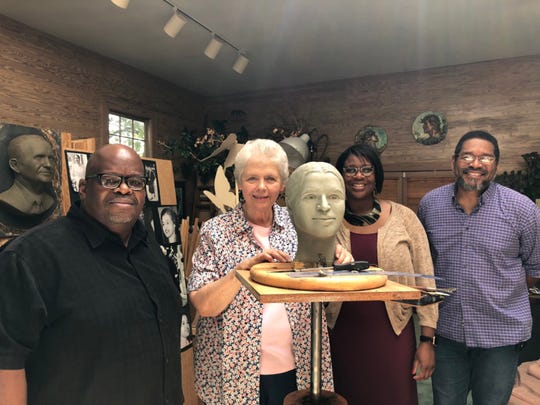 Clydetta Fulmer: “At this point, I needed the guidance of the committee to decide the expression that they wanted me to try to capture. They came to my studio and made some suggestions, and I made changes in the clay while they watched and approved.” (Photo: Contributed)

“Those three individuals were the ones who really worked for the next six months on decisions,” Ledbetter said. “For instance, what age would (Rosa Parks) be? What stance? How would the statue be located? Where should it go?”

Once Fulmer was on board, she downloaded many photographs of Rosa Parks at various ages to get a point of reference.

“They wanted her portrayed on the day at the end of the Bus Boycott,” Fulmer said. “At that time, she was 42 years old. She said one time that people generally thought of her as being elderly when she did this. She was not.”

“(Fulmer’s) studio would look like a CSI show, because she would have hundreds of pictures,” Ledbetter said. 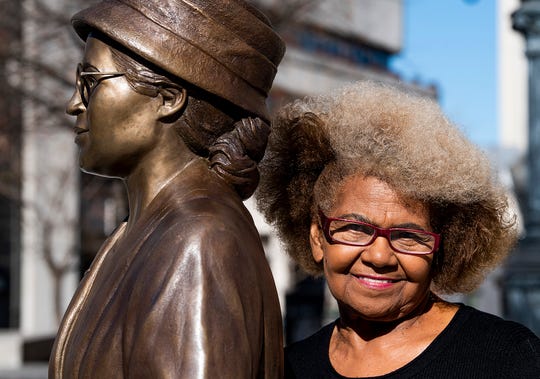 Allena Curry Norman poses beside the Rosa Parks statue in downtown Montgomery, Ala., on Wednesday December 18, 2019. Norman did the hairstyle used by the sculptor on the statue. (Photo: Mickey Welsh / Advertiser)

“The day of the victory ride was a preplanned event, so (Parks) had her hair done that day in a different style than she normally had it,” Ledbetter said.

Kimberly Brown Pellum, who is roughly the same size as Parks, was selected to be the statue’s model. Fulmer took rough measurements from Pellum from her head to her feet. “That gave me the framework to work from,” Fulmer said.

“The Alabama Shakespeare Festival was instrumental in the correct types of clothing,” Ledbetter said. 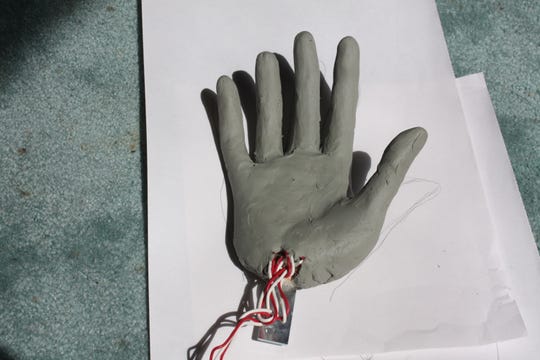 Clay is shown wrapped around the wire and wood to make a hand.  (Photo: Contributed)

When Fulmer signed the contract to create the Parks statue, she was a little apprehensive about meeting the Dec. 1 unveiling deadline. After all, she usually asks for a year to work on this kind of project.

Instead, she had a little under seven months.

“Thank the Lord that we made it,” Fulmer said, adding that she had to put in a lot of overtime effort. This was the fastest sculpture of this magnitude she’s ever done.

The first version of Fulmer’s Parks statue is a lifesize clay figure. But before there was clay, there were sticks. She had to create a framework.

Then came hundreds of pounds of oil-based clay. 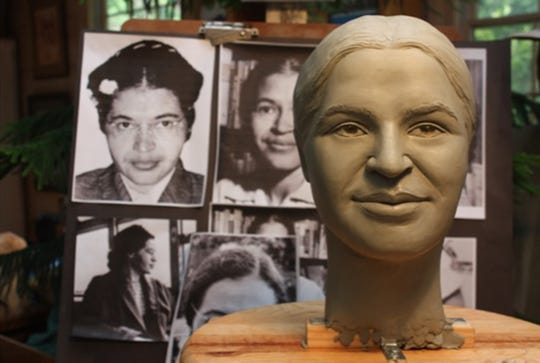 Clydetta Fulmer: “Then I began to concentrate on making the sculpture look like one specific woman, Rosa Parks. I compared the clay head to the many photographs that I had downloaded from the internet. I studied the many different views. I looked at photographs from the time that she was very young until she was very old. I was looking for the characteristics in her face that did not change over the years. I was looking for an ‘essence.'” (Photo: Contributed)

“I built up clay for several months,” Fulmer said. “At various points, the committee would come out to my studio and see it, make comments to approve this or that, or mention things they wanted changed.”

“We met frequently at her studio,” Bell said. “We were able to join in on her creative process and watch her develop this work of art over time.”

Several other groups also stopped by as well to watch the progress, including Mayor Strange who made his own slight adjustment on the hat.

Some of the visitors to Fulmer’s studio knew Parks in life.

“They might suggest one little touch or one little change,” Fulmer said. “That was important to them.”

“Miss Fulmer is very detail oriented as she creates,” Bell said. “It was a privilege to work with her and to be a part of this process.” 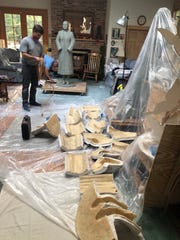 The molds were removed from the clay statue. They would then be taken to the Fairhope Foundry. The bronze casting would be made from these molds.  (Photo: Contributed)

After getting final approval on clay Parks, it was time for this sculpture to help give birth to bronze Parks’ final cast form.

This stage requires a lot of trust on Fulmer’s part. Her delicate clay sculpture was about to be covered in many layers of flexible mold materials, something that if done wrong could ruin the work.

“You’ve got to have complete confidence in the foundry to not disturb your art, and not make changes,” Ledbetter said. “Because they can mess it up.”

Fortunately, Fulmer put her trust in Corey Swindle of the Fairhope Foundry. They’ve cast other statues around Montgomery, including the Supreme Court justices downtown.

Instead of one big mold, Fulmer said Swindle created 20 small molds of Parks to take back to the foundry. Fulmer said the hands of the clay statue had to be cut off and cast separately. 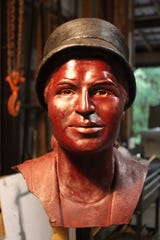 Rosa Parks’ head cast in wax, which was used to create the ceramic mold.  (Photo: Contributed)

“When they pull the mold off of the clay, some damage is done to the clay,” Fulmer said.

These molds were used to create wax castings.

“I went down to the foundry and touched up the wax,” Fulmer said. “I heated my little metal tools up with a blow torch and touched up any imperfections.”

When the wax pieces were ready, the foundry dipped them into a ceramic mixture and then reinforced it, creating a strong ceramic shell.

What happened next is called lost-wax bronze casting. They used the furnace to melt the wax out, leaving the shape in the ceramic shells.  The shells would then have molten bronze poured into them.

“Then the shell is broken off. Those 20 pieces are welded back together,” Fulmer said. “The welds are sanded, and any imperfections are touched up in the metal.” 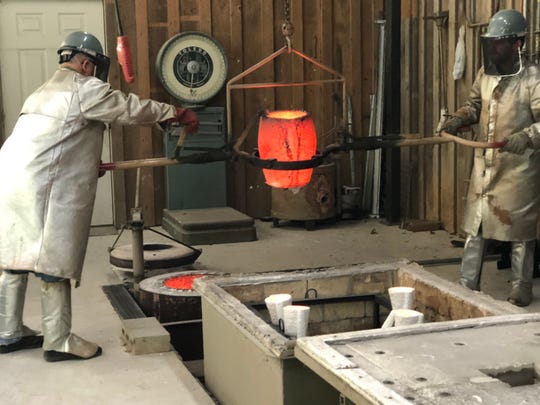 Fulmer said the last piece to be attached was Parks’ glasses, which are slightly larger than in real life to ensure strength and stability.

“I was really pleased with how it turned out,” Fulmer said.

Now that the Parks puzzle was all together, the next step was to give it the right patina. It involved heating the bronze and spraying chemicals to create the right color.

“Patinas can really change the appearance of a statue,” Ledbetter said. 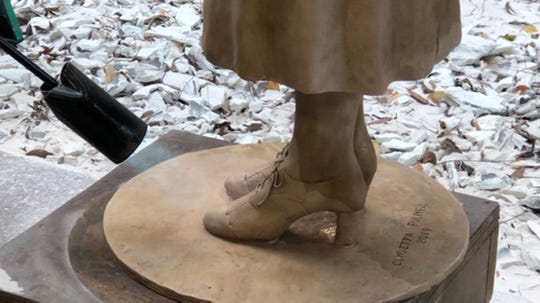 The statue is heated with a blow torch and then chemicals are sprayed onto the bronze to give it the desired color. The highlights are rubbed back with steel wool or a Scotch-Brite pad. (Photo: Contributed)

“At that point, it’s ready to be delivered to the site.” Fulmer said.

A hole was ground into the sidewalk to insert Parks’ base. They made it so Parks’ feet are flush with the pavement, just a figure standing there waiting on her bus.

“Our city building maintenance guys did a great job of installing her,” Ledbetter said.

Ledbetter said new Mayor Steven Reed also supported the project and was helpful with the dedication and surrounding events.

So, short of some kind of accident, how long can a bronze statue like this last out in the elements?

“Barring a catastrophe of some kind, it should be here,” Fulmer said. “There are statues that are cast in bronze that were in existence in ancient Greece and Rome.” 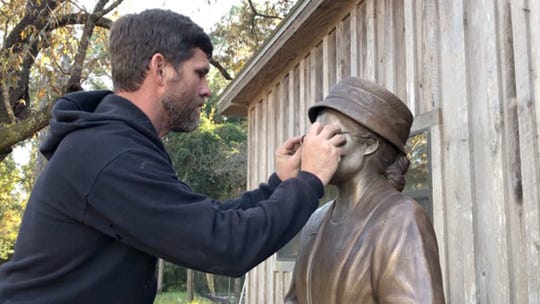 Clydetta Fulmer: “When the patina was completed, then the statue was waxed. The final touch was to add the bronze glasses. Corey Swindle had to make the bronze rims wider than the rims that were almost invisible that Rosa Parks wore that day. He had to do this so that the glasses would not be easily broken.”  (Photo: Contributed)

More ahead for clay

Other than the clay statue’s hands being removed, and the mold messing up her hair and coat tail a little, Fulmer said clay Parks received surprisingly little damage from the mold making process.

Fulmer said if the need arose, the clay version could be restored fairly easily. For now, this statue is still standing at Fulmer’s shop, though this likely isn’t her clay’s final form.

“What I do is, after a certain period of time, I clean the clay and recycle it,” Fulmer said.