In the summer of 2018, when I was looking for a home or condo to buy, I happened upon a really funky house in West Orange that grabbed my attention. It was on a corner lot, with a big yard, plenty of trees and space, but it was the design and layout that I really liked. As you can see from this exterior view at the time, it was a single-story home, and – while I’m not an expert on real estate or housing styles – I assume you would call it a ranch home. What you can’t see in this picture below is the fact that it was a U-shaped home, with three sides surrounding a patio or courtyard, which felt very European, or maybe mid-century modern? (again, I’m not well-versed in these definitions)

Another thing I really liked about this home at the time that I saw it, was that the current (or last?) homeowner was clearly an artist, as there were a lot of unusual details that one just doesn’t see in most homes. Let’s start off with the most obvious example, check out these pictures of the master bedroom: orange walls, and then there’s the ceiling, which has this really funky circular “dot” mural!

Seriously, when have you ever seen anything like this in someone’s bedroom?

Scattered throughout the house were other signs of an artistic (and perhaps eccentric) homeowner, as you can see below: some sort of Asian dragon art, different types of artistic tiles, and how about that faux leopard-skin light switch?

A couple more details that I liked – check out the sputnik chandelier in the living room – note that there’s both blue and yellow walls in the same room!

That blue wall in the photo above is seen in full here, with a big, open fireplace. One has to wonder if it was “too open,” as there appears to be soot stains on the wall and definitely on the bricks surrounding the fireplace opening. Sure, this looks pretty run-down, but it seemed filled with potential to me.

Outside there were both good and bad things of note. Check out the bamboo in the backyard (below left), along with a tall fence for privacy. But also check out the cedar shingles (below right) – one could see that the roof was damaged in multiple spots, with moss and other vegetation growing on and in-between the cedar shingles. 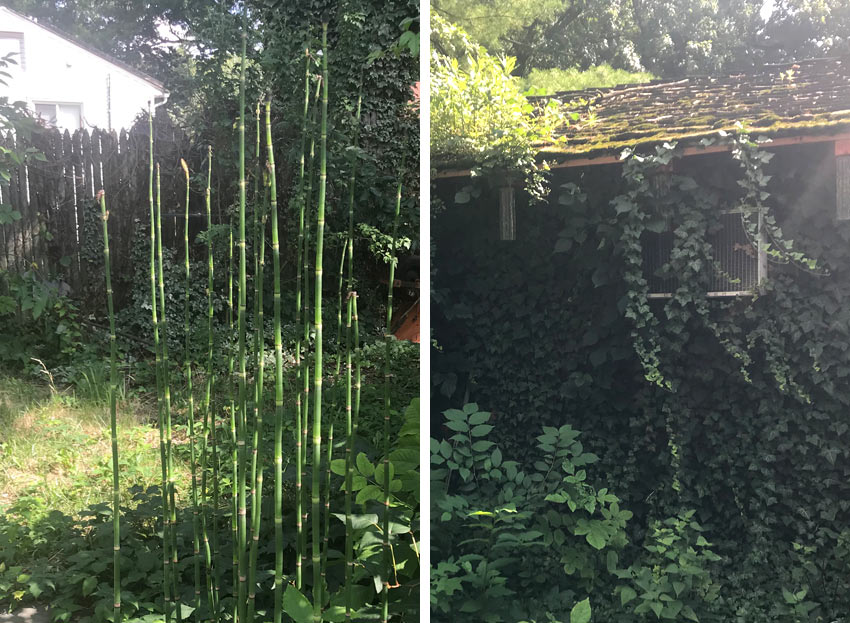 This last detail helps explain – despite my infatuation with the house and the artistic details – why I didn’t put in a bid or try to buy it. I don’t remember the exact asking price, but I remember it was reasonable, but between the lot size making for high property taxes and the damaged roof (which also allowed for water damage inside), my thought was that one would have to probably spend as much money fixing it as one would pay for the house, and that total cost was definitely out of my budget.

So, you may wonder, why am I writing about this house now, two and a half years later, after I saw it? I decided to go drive around the “Valley Arts District” in Orange yesterday, and figured as long as I was in the neighborhood, I would drive by and revisit my “dream house” from the summer of 2018. I thought I remembered where it was, but as I drove down South Valley Road, I didn’t see it, and next thing I knew I was in South Orange. So I backtracked, took some side streets in case my memory of the location was wrong, and still didn’t find it. When I got home, I dug up these old pictures and saw that in fact I did drive by where it used to be – except it wasn’t there! I looked online and found this picture below – it was demolished one year later, in the summer of 2019. Considering I drove right by this yesterday and didn’t see anything obviously new or different, I’m not sure what exactly is on that exact plot of land now … I guess I’ll have to go back one more time to satisfy my curiosity.

The Links Between Linear Perspective and Virtual Reality Technology

Why Are Giorgione’s Paintings So Mysterious, Even Centuries Later?

The Links Between Linear Perspective and Virtual Reality Technology

Why Are Giorgione’s Paintings So Mysterious, Even Centuries Later?