I was in the Bronx the other day and pulled up at a red light behind this jeep at an exit from the Major Deegan Expressway near Yankee Stadium. The custom-painted tire cover on the back reads “Guayama Puerto Rico” with “Brujos” in the middle, and shows a witch sitting in a pot holding a spider. I had no idea what this referred to, but I liked the funky style, so I decided to do a little research. 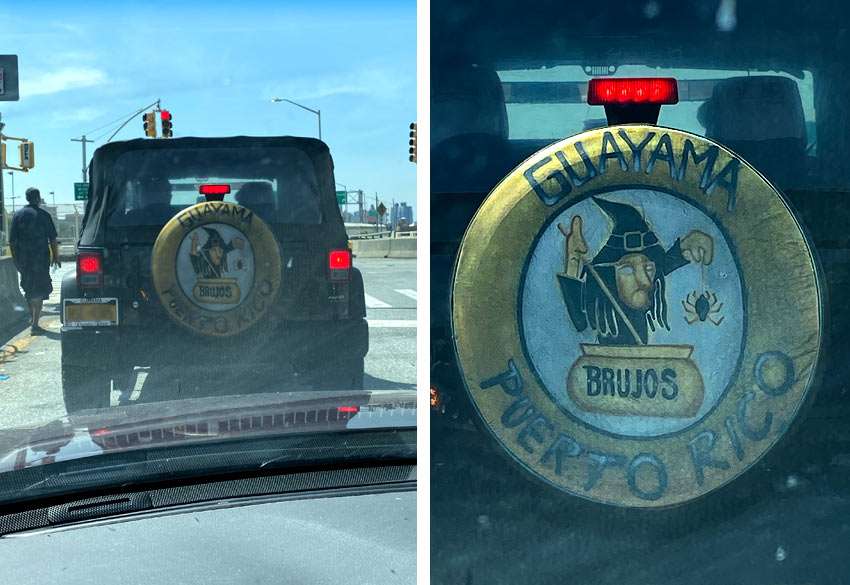 The first thing I learned is that “Brujos” is Spanish for wizard or warlock, and that the “Brujos de Guayama” is a Puerto Rican professional basketball team of the Baloncesto Superior Nacional based in Guayama, Puerto Rico. Considering that their official logo looks like this, it seems that this is definitely a handmade custom version, showing appreciation for the team.

But wait … I see that “Brujos de Guayama” is also the name of a AA baseball team in the Puerto Rico Superior Baseball league, as you can see here. The similarities between this second logo and the warlock hat on the figure on the tire cover might suggest that this is a baseball fan instead of a basketball fan. Either way, I like the hand-painted art.

Getting By With a Little Help from His Friends – Artist Insights from Janis Sanders for Maine Art Hill in Kennebunk, Maine

Barns – A Thank You for Ingunn Milla Joergensen and Artist at Maine Art Hill in Kennebunk, Maine

What’s On at the RBSA Gallery in August – ART BLOG

Getting By With a Little Help from His Friends – Artist...

Barns – A Thank You for Ingunn Milla Joergensen and Artist...